I have decided to bring some colour in this terrible, grey, wet, rainy and snowy week. So I played a bit with the actions of PTM and had so much fun doing this.

My son during his ride 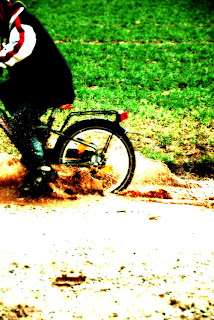 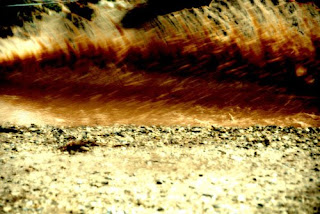 The bike after the ride 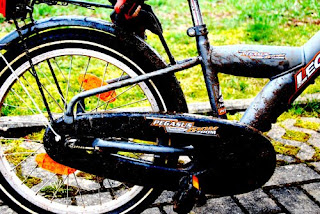 After his homeworks my younger son asked if he could go outside to ride with his bike ...over the cartway ... sure ...

I watched him from the bedroom window... but he didn´t know that.

It shan't be long and it begans to rain. My son had so much fun driving through a puddle. As I saw this I had an idea for my daily shot, although I didn´t like mud and dirt ... I snapped my camera and went downstairs to him.

He was surprised and his first question after I had told him what my plan was ... was "Are you sure I´m allowed to drive through the puddles - do you really want that?" I couldn't help laughing. So I had some fun, too!
Eingestellt von bentonflocke um 08:47

Looks like you both had lots of fun. I love the vintage look and feel of the pictures.

Lol, so funny! Glad you both had a great time. The pictures are awesome, love the bright colors! The first picture is cropped in a very cool way, so great with him on his way out of the picture and the puddle in the middle.

Great shots! I love the story behind them too!

If my kids had to stay in when it rained, I would lose my sanity :) Mud is just part of life on the Oregon Coast :D

those are amazing photos!! love what you did with them!!

Fabulous photos! I love the actions you used they are fabulous! Wonderful result. What is your first name? So that my messages are more personal. ((HUGS)) Have a lovely weekend.

great, great pics!! love that he had to make sure it was OK to do.

Great photos! I love actions on Photoshop as well. I'm sure he had fun helping you out!

Isn't it funny what we do to get our photos of the day? :) Those actions look great on your photos today!

The tutorial for making text with photo is coming on my blog tonight, in a few hours!

Great shots. If I didn't think I'd look like a fool, I'd ride my bike through puddles too.. =)

These are fantastic! I love everything - the colour, the action, everything! Great, great shots.

I love the action in your pictures!!! Very cool colors too!! Hope your rain goes away!! And, thank you for always coming to my blog and commenting! You are so sweet!!! :)