Today was another busy day with an important appointment in a desperate fight for our elementary school. Also the kids had appointments - and I´ll had to take them there. 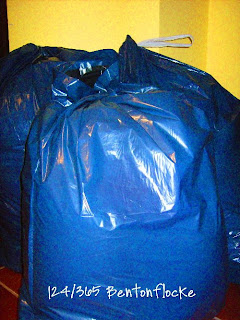 During the day I sorted out clothes - and these are the first three bags!

If you are wondering of "the first three bags".... it doesn´t meen that I have so much clothes... that´s only because it is hard for me to part with the clothes ... and after a operation and eating some chocolate or other goodies, they don´t fit me anymore... But now it is the time to become unfastened and to face up to the facts... and I should move more often instead of blooging. This would also be better for my intervertebral disk.

We had lovely and sunny weather but only 14°C degrees. In the afternoon my younger son was riding with his bike over the cart track and took pictures with his own camera. Don´t know what - but I´m sure he had found some interesting things ... from the viewpoint of him... 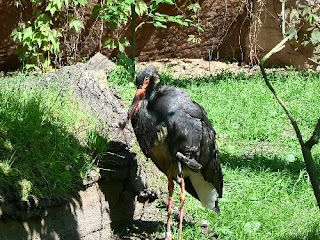 This is a picture from yesterday... when we where in the zoo... This shot was taken by my elder son with his own camera.
Eingestellt von bentonflocke um 20:41

The first tree bags! OMG, how many clothes do you have? When I sort out 3 bags from my wardrobe, then the wardrobe is blank.

Yes, I would have the same problem like takinu after sort out 3 bags of old clothes ... then my wardrobe would be empty, too.
you've been very busy today!
A great shot of your son!

I need to sort too - my rule is if it's stained, ripped, wrong size or worn out, IT GOES (unless it's my favorite...then it gets worn until it falls off) :)

if I cleaned out my clothes, it would be the same. I am like you, I don't like to get rid of them!!!

I hear you, I need to move a LOT more and blog a LOT less, then my rear end might not look so much like a waffle...

I understand about the bags...I got rid of about 4 last year...and my closet is stuffed again! They must breed in there LOL!

Good job with the clothes sorting and your son did a great job on that picture!

Doesn't it feel good to get rid of the old?

I think it's great that you have finally parted with clothes that don't fit anymore. I need to do that! I love the shot of... is that a turkey?

Wow, great work sorting out the stuff!
Nice picture from your son too, cool bird. =)

Sorting clothes is a real though job :D great picca..

We just got rid of about three bags. My son is still growing so it is mostly his stuff. My daughter is done growing so she's wearing things until they wear out and have to be thrown in the trash!

Both Freckles and Ruby are beagles!

Thanks for stopping by. Have a great Tuesday!

Photography is obviously in the genes :) Your son has taken a wonderful shot. WOWL at the three bags of clothes, I should do that to my DHs wardrobe :)