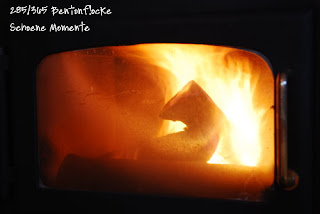 The day started dark and cold with about 7° C degrees and a heavy downpour.

My picture for today is also for the project from Katinka "Schöne Momente im Herbst/Winter" and shows you our chimney fire from Saturday.

It was a busy Monday with many appointments; for example influenza vaccination for three of us.


The whole day was mostly dark and grey, and it was raining again and again. 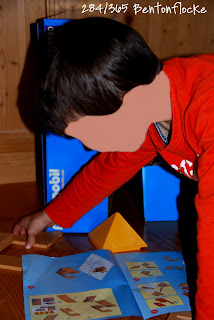 ..... my elder son had another international swimming competition - there were also teams from Austria and Czechoslovakia. I brought him to the meeting point for the departure.

After breakfast I went to children´s church with my younger son.

Later I picked up my son at the swimming bath and we enjoyed a sandwich at Su*bways.

We had cold, dark, grey, rainy and stormy weather today. So the rest of the day was lazy; in front of our chimney. 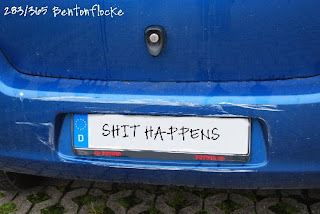 In the early morning my younger son had his guitar lesson, whilst my husband and my elder son had an appointment at the hairdresser in each case.

On his way out of the garage, my husband hit the car of the guitar teacher...

Playing soccer on a cold, rainy and windy day wasn´t much funny...

For warming up we enjoyed afterwards a visit in an Italian restaurant, where I had mussels in wine sauce. Delicious.

Back home again we lit a chimney fire what was very comfortable.

In front of it my younger son built-up the Playmobil pyramid he bought by himself, after saving money for a long time. He was so proud!!

Your boys have a lot of jobs in leisure time. We are happy to create riding once a week.
Autumn decoration is beautiful. Here since 2 days it is raining and cold.
This is silly, that your husband has touched the car of the guitar teacher. hugs Takinu

For the life of me I couldn't figure out what the first picture was.

It looked like a back lit shot of something in a glass jar! :)

Hi Angelika! It's getting cold there! Sounds like you're keeping warm by the fire. I'm sorry your husband had a little accident hitting the guitar teacher's car. Hope everything is ok!

A fire sounds wonderful right now! Too bad about the accident, but glad it was a little one!

I love your photos and descriptions. Like Michelle, I had to read your description to figure out what that first photo was!!

Love your other photos. I had my flu shot last week and am thinking about getting shots for the kids.

You had a busy weekend but still found time to visit my blog - very sweet.

Stay warm. It is headed down to 38 degrees F tonight here.. brrrrrr

Wow, the fire place picture looks so cozy. Wish I had a fire place in our apartment =)

Sorry about your little car accident!

the fireplace is really nice!! i use to have a fireplace in our first apartment here in paris but we didn't get to use it. i really wonder how it feels be near a fireplace during this cold season... would have been nice huh. well... hope everything is well there!

the fire is beautiful!!

I had it when that "___" happens!! Hopefully the other car doesn't look too bad!

Oh no sorry to hear about the car! Love the new numberplate LOL thats my favourite saying.

It is still cold here, but alas we have run out of wood so are using the gas heater, hopefully soon we will have happy weather.

There's a wonderful picture for the theme from Katinka!
Great wishes and have a nice day
Kvelli