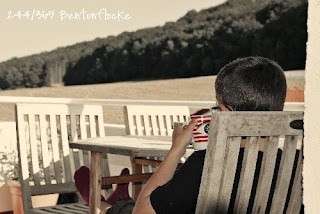 Today was the last hot day for now. We had 31°C degrees in the end and it was quite sunny.

I was still busy with the laundry and as well today with the grocery shopping. In the afternoon I baked a plums cake just for the heck of it. Whilst my son was enjoying a relaxing moment, with a self-made mug of coffee (the coffee, not the mug LOL) and putting his feet up.

That´s my picture for today processed with actions by pioneer woman.

At 6 pm we met up with a good friend (remember I told you on day 238) to catch up the dinner in "our" Italian restaurant. It was like holiday - outside in the garden, with the balmy air and the lights there. We had a fantastic last summer evening.

As a storm came on we said goodbye - 9:00 pm we had still 25°C degrees. Back home again, it began to rain and a thunderstorm was approaching. 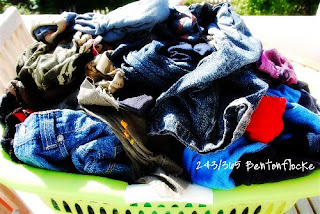 Busy laundry day after the vacation camp of the boys


Early in the morning I had a doctors appointment with the children.

As I were back home with my younger son - his grandmother called - asked if he has a good mind to come to her again, for some days!! He doesn't hang about and didn´t had to consider long....

So after 10 days of vacation camp, he stepped in for a one night sleeping in his own bed and packed his luggage again, for a new sleep over by his grandparents.... I think it´ll last for almost 2 weeks - when he´ll renounce of two parts of the local vacation program.

That´s my younger son; always in transit to his beloved grandparents - he is using every opportunity for being there.

Nice pictures. I've just done a pile of laundry too.
I love The Pioneer Womans photos.

That shot of your son relaxing looks like it could be an ad from a magazine. :)

Oh, laundry piles are no fun, but it feels great when everything is washed, dried, folded and put back in the drawers. When does your boys go back to school? How long vacation do they have? In Sweden schools ended in middle June, and began again end August, that makes about 8-9 weeks of summer vacation.

love what you did to those pictures!!!

love that picture of your son enjoying a mug of coffee with his legs up...looked like a real grown up. hope the sleep over of you other son with his grandparents went well...

Love your pictures. These actions look great, I have to check them out. My kids love theri grandparents too. It's great!!

Love your photos using the PW actions! Your son looks very relaxed on the balcony. Great that you met with a good friend for dinner, sounds fantastic! And so awesome that your younger son has such a great relationship with his grandparents.