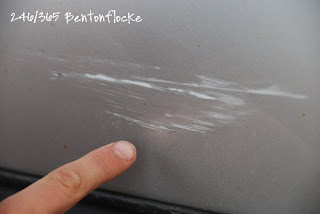 My elder son slept in until 8 am - that´s really rare! After the breakfast we had an appointment with his private Englisch tutor! School will start again in 2 weeks so he must be prepared for it.

Most of the day we had rain.

The picture of today shows you my husband´s car that was hit by another car while parked - glad nothing more happened and nobody was injured - but anyway it is a real bother!

Causer was a 87 year old man... noticed nothing.... and was addressed by a noninvolved woman. Luck for us!! Then the man stopped and was waiting and asking which car it could be, but nobody knew. So he went to the police and they were the ones who did leave a note for my husband.

Note for Fab - the damage isn´t big enough for cancelling our plans -LOL- so don´t worry about it.

I'm so sorry your husband's car was hit by another car while parked! Did they leave a note?

What an honor for your son's friend to be in that choir!

seriously..and 87 year old man was still DRIVING?!! How did he get his license renewed?!!

What a bummer about your husbands car. At least you got information on it though!

I am sorry about your husband's car - but, like you've said, fortunately nobody was injured. It's just disappointing when your car gets that first dent....

I can't believe your boys start school in two weeks! How many weeks off from school did they get because it seems like school just ended for them not that long ago?

Sorry to hear about your car! Glad no one was hurt!

So sorry about the damaged car. Lucky you found out who did it!

oh no! It doesn't rain it pours, I hope the damage can be rectified sooner than later!