Today in the morning the sky wasn´t so cloudy as yesterday and we had 9° C degrees.

After breakfast we started to a hike over the “Märchenwandermeile” On the way there are different stations telling different fairy tales. It´s a wonderful place for children with playgrounds, donkeys, ponys, witches and the option for gold digging. 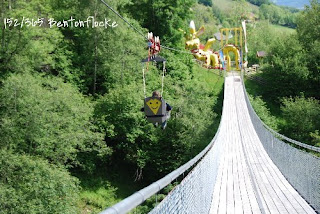 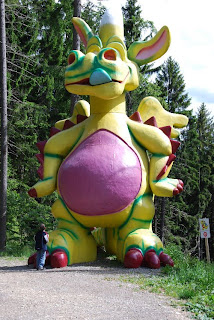 One of the giant dragons there - can you see my son on his left feet? 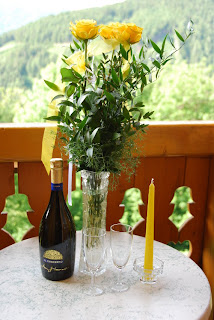 A courtesy of the hotel for our wedding anniversary. I had ordered the yellow flowers, but the prosecco and the candle was the idea of the hotel. Isn´t that cute?

Because of my DH´s racking toothache we went home early – where he take a nap after some aspirin. I think he must go to the dentist, tomorrow. The barking cough of my younger son is a little bit better.

While my DH was sleeping, my son was playing in the hotel garden, and I was sitting there in the sun (21°C degrees) with a good crime book and a cup of café latte.... I think at the end there were three...LOL

that bridge is so cool...I would love to take that ride!!! did you do it?

hope your husbands toothache gets better, there is nothing worse in my opinion!

what a wonderful hotel to take care of you that way!! the flowers are beautiful!

Sounds like a really fun place to visit! Glad to hear the cough is better, tomorrow hope the tooth is!
Happy Anniversary!

I’m loving your vacation pictures. I was I could join you but not disturb the family quality time.

What a fun place! I love mystery crime novels too. I'm sorry your DH had bad toothache. I hope he feels better.

Happy Wedding Anniversary My friend, I hope you both enjoyed your prosecco? I want to come to that place, I love fairy tales and it looks enchanting!

happy anniversary to you!!
those pictures are really wonderful!! enjoyed reading your blog...

Sounds like a delightful day. My son would love that ride by the bridge. Is it really as steep as your picture?

The Märchenland looks very funny, I'll remember that if we ever go to Austria with Linus.
Sorry about your DHs tooth, hope you guys could enjoy your anniversery anyway, and that he gets better soon.

Subsequently cordial congratulation on the wedding anniversary.
That is completely annoying from the hotel.
I would have liked the Märchenwaldwandermeile also very much well.