Sorry girls - I wasn´t clear-headed the last days - (my DH is still at home, the cars were in garage and my younger son is ill) so I didn´t take any pictures. The following ones are all from today, I must confess it. 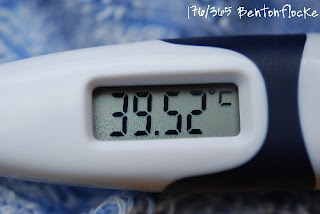 
My younger son had to stay at home because of his heavy earache. We went to the doctor and he told us that my son is having an otitis media on both sides and a beginning tonsillitis.

He prescribed us antibiotics, nose drops and a liquid against his pain. And he didn´t allow him to swim this week. So he isn´t able to take part in his swimming competition on Saturday - and maybe also in a farewell party at his school, tomorrow. This school will be closed at the end of this school year.

Most of the day my son was freely sleeping. He was not even interested in watching Sponge Bob on TV.

We are so relieved about my elder son´s grade C in his English exercise. Ok, I know it isn´t still good. But after grade F, it seems to be fantastic. My elder son is almost highly talented and a very good pupil. So we don´t know what´s so difficult for him in English.

The weather today was very sticky. We had about 20°C and it was very cloudy, grey and there was no sun.

Before I forget, my car is back from garage. The air conditioner, the side mirror and the servo steering were repaired. Hope everything is working now. 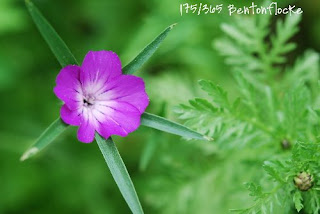 Another new flower in the bed of my younger son


I had to work until 6 pm. As I picked up my sons at their grandmother, my younger one told me, that he is having earache. Poor boy! He had an early night.
Hope he is feeling better tomorrow.

The weather was still grey, cloudy and nearly stormy. 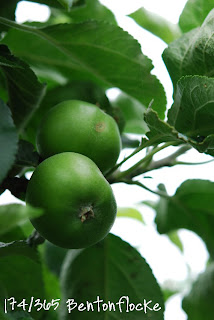 The apples in our garden are growing

My younger one felt cold, so I hope he wouldn´t become ill.
Eingestellt von bentonflocke um 16:48

I am sorry about your son's ear - that is pain like no other!!! I hope he just sleeps through the pain.

Sometimes it's hard to find something to photograph but you did a wonderful job catching up.

Get well soon for your son. My partner also has tonsillitis. Next week he goes to work again.
Hopefully your car will remain quite now.
Do you work every Wednesday to 6 clock?

praying your son gets well soon!!! And I think we have all been there where life is too busy to take a picture!!!

I would love to be able to have a couple of those apples!!

I love the photo of the flower, and the apples. You take such lovely photos!

An earache is no fun and I hope your younger son is better soon. They are so painful!

And it looks like you are having very hot temperatures there like we are? We have been hitting 100 F or higher every single day this week! The poor dogs are just miserable when they need to go outside!

(I always forget how to translate centigrade to fahrenheit, but I know that 39 C is very hot!)

Ouch, sorry about not feeling well! Hope you all get better soon. The pictures are great anyway. Good idea to take a photo of the temperature; not fun at all but part of everyday life.

OMG. And I said centigrade instead of celsius. Duh. Well, at least you got a good laugh from my idiocy. :)

Hope your son is feeling much better! Not fun to be sick in the summertime!

This is such sad news. I'm sorry he will miss such fun activities and hope he gets well soon.

I hope your youngest feels better. Earaches are awful. English is a crazy language - I can see why your older son is having trouble!

I hope your son's ear pain has started to ease a bit. My daughter used to get "swimmer's ear" and we ended up in the emergency room of the hospital a couple of time - ear pain is awful but it sounds like you got the medicine in time.

As far as the translation to German, I actually found a site that translates. I'd like to take credit and say I figured it out myself but I didn't. I am going to search the web for other ways to maybe learn enough of your language to type some simple sentences. My daughter would love to learn German and she saw your post and asked if you could teach her! My niece speaks it fluently and, in fact, lived and worked in Germany for a while.

Take care and let your little boy know that he has friends praying for him to feel better.

P.S. My kids loved Sponge Bob when they were small - and we did too!

hello!! sorry to hear that son is sick. i hope he gets well soon. love the photo of the apples! i hope you can take a phot of it when they are ripe.
another weekend ahead!! have a wonderful weekend!!

Sorry to hear you younger son isn't well, wishing him a speedy recovery. I definitely would be praising your elder son with such a great jump in grades. Maybe we should introduce him to one of my boys on msn and they can talk in english? If you ever need me you can pm me through Pixel Canvas.

Wonderful photo of the apples - are they sour? My boys love sour green apples. I love them for baking.

Thinking of you ((HUGS))

Sorry to hear this, hope he is feeling a little bitter by now?

hope your son gets well soon... i am sure its very hard for you all!

I so hope my comment will be posted without any problems today!

Have a great weekend sweety!

About the English grade...my HH said to say that he bets that even we native English speakers wouldn't do so well in the class!

Well I am a few days behind on your blog due to my trip. I hope your son's ear infection is taken care of and his hearing is okay! Beautiful photo of the apples.